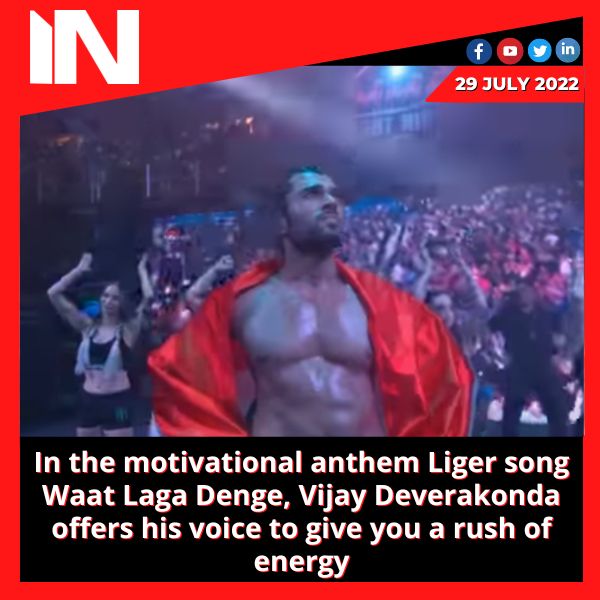 In the teaser for his upcoming movie, Liger, Vijay Deverakonda can be seen stammering. The actor’s on-screen character, an MMA fighter, goes on to represent India in a vital match as the song Waat Laga Denge, which was inspired by the same issue, plays in the background. The song, which was written by Liger director Puri Jagannadh and composed by Sunil Kashyap, was performed by Vijay Deverakonda.

The peculiar camera technique and the images of the crowd dancing to the upbeat song enhance the impression. The “ideal motivational anthem for your next objective” is how it is marketed. One can also note Vijay’s eerily similar line delivery to Suniel Shetty when the song begins with him saying, “waat laga denge.”

Karan Johar is the producer and Puri Jagannadh is the director of Liger. Vijay makes his Hindi cinematic debut with this movie. Along with Ananya Panday playing his fiancée and Ramya Krishnan playing his mother, Ronit Roy plays his instructor, and Mike Tyson makes a brief appearance. On August 25, it will be released in Hindi, Tamil, Telugu, Kannada, and Malayalam theatres.

Last Thursday, Vijay debuted the Liger teaser in Hyderabad before moving on to Mumbai. He wore slippers to the Mumbai event and actor Ranveer Singh complimented him for his self-assurance in wearing them. The season 7 episode 4 of Koffee With Karan, which aired on Thursday, also included Vijay and Ananya.

Few weeks prior, the debut track from Liger, named Akdi Pakdi, was made public. Vijay and Ananya demonstrate their best dance moves throughout the upbeat dance sequence.

Speaking recently to PTI about his feature debut in Hindi, Vijay said, “I regard (my Hindi debut) as getting to live a dream. I enjoy sharing stories with large audiences in large auditoriums. India has a larger auditorium. I regard it as the realisation of a personal goal and aspiration.