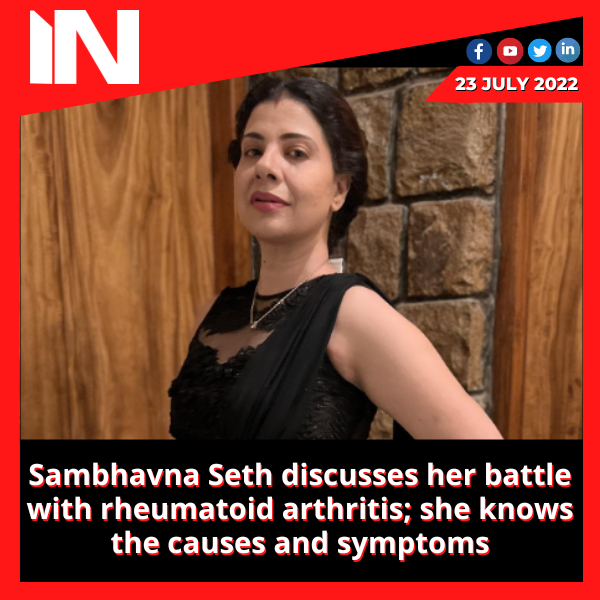 Sambhavna Seth, a TV actress and celebrity of the Bhojpuri language, has opened up about her battle with rheumatoid arthritis, an inflammatory condition that affects the hands, knees, wrists, and heels of sufferers. The Bigg Boss contestant broke down in tears as she described how crippling foot pain, particularly in the heels, prevents her from walking normally. The actress complained of severe pain and stiffness in her fingers and elbow. Sambhavna claimed that despite receiving a rheumatoid arthritis diagnosis many years prior, the condition eventually went away. However, the actress feels that the RA factor in her blood is active once more, which may be related to the IVF treatment she is receiving.

A chronic inflammatory autoimmune condition called rheumatoid arthritis occurs when your immune system unintentionally targets the tissues in your own body. RA sometimes affects multiple joints at once and frequently damages the hands, wrists, and knee joints.

“Your joints’ lining is impacted by rheumatoid arthritis, which results in a painful swelling that may eventually lead to bone loss and joint deformity. RA can also harm various tissues throughout the body, resulting in concerns with the skin, lungs, heart, blood vessels, and eyes, among other organs “the Marengo QRG Hospital in Faridabad’s Director of Orthopaedics and Joint Replacement, Dr. Sumit Batra.

What rheumatoid arthritis symptoms are there?

Patients with rheumatoid arthritis may experience symptoms of varying severity because there is no known cure for the condition. They could occasionally develop worse (known as flares) or better (known as remission).

RA symptoms and signs include:

Early illness typically begins in the hands’ tiny joints and can later spread to other joints, such as the knee, ankles, elbow, and shoulder.

– About 40% of individuals additionally have symptoms of their eyes, lungs, skin, or heart.

The immune system of the body destroys its own healthy cells, which leads to rheumatoid arthritis.

– Genetics: RA is more prone to develop in those who were born with particular genes. HLA (human leukocyte antigen) class II genotypes are the name given to these genes.

– Smoking and obesity can make RA more likely to occur.

– Women who have never given birth could be more susceptible to RA.

Rheumatoid arthritis has no known treatment. Medication or surgery can help the patient’s symptoms and quality of life.

Medication: Nonsteroidal anti-inflammatory drugs (NSAIDs), steroids, and particular pharmaceuticals called as DMARDs can all be used to treat the disease (Disease modifying antirheumatic drugs). These medications can be suggested to help rheumatoid arthritis develop more slowly and protect the joints and other tissues from long-term harm. Methotrexate, leflunomide, hydroxychloroquine, sulfasalazine, and biologic medicines are examples of common DMARDs.

Surgery: In some cases, surgery can help with pain management and function enhancement. Synovectomy (removal of the joint lining), joint fusion, and total joint replacement are surgical alternatives.