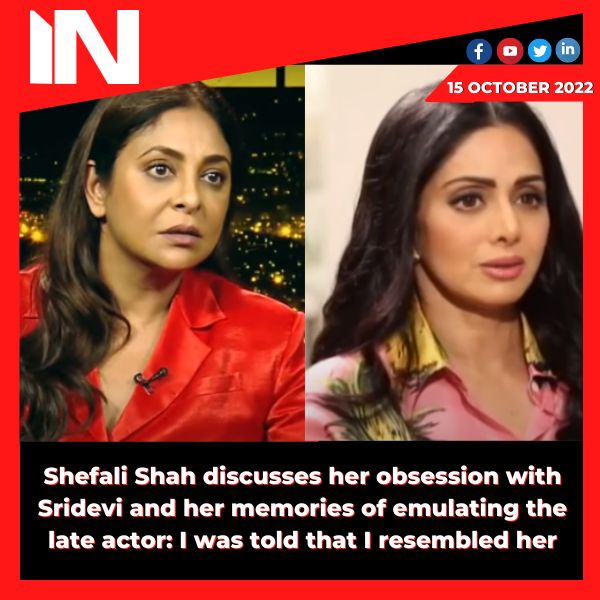 The late actor Sridevi was the subject of actor Shefali Shah’s former obsession, according to the actress. Shefali claimed in a recent interview that she began mimicking Sridevi after someone told her she reminded them of the actress. Later, Shefali said, she stopped doing that because she believed “there can’t be another Sridevi.” Her sons compared her to Iron Man, she added.

Shefali admitted in an interview with Indian Express, “I never imagined that I would become an actor. It wasn’t in the distance. I should note, though, that Sridevi ji was actually my biggest inspiration; I was simply fixated with her. I was also told that I resembled her, therefore I gradually began to do so. Thankfully, wisdom came knocking one day and I was like what am I doing? There can’t be another Sridevi, so stop it. That way it wouldn’t have become my calling as I was trying to be somebody else. Another one who still remains a favourite is Smita Patil. They were both just something else.”

When referring to her sons, she replied “Oh, they are so pleased with me. My son gave me the finest praise following Delhi Crime 2. You’re aware that you’ve turned into Iron Man, he said. I questioned him, “Am I like a superwoman?” Except for Iron Man, he revealed that every Marvel character has been portrayed by a different actor. You’ve changed into that because only one actor has performed it. You are irreplaceable. I wanted to print it up and hang it up on the walls because I was so moved.”

Avinash Arun’s 3 of Us, to be starred by Shefali, is forthcoming. Swanand Kirkire and Jaideep Ahlawat also appear in the romantic drama. Shefali will portray a vulnerable character in the movie.

Here’s how ISRO plans to enter the global market for commercial launch services.

Why you should include avocado oil in your diet, from lowering blood pressure to protecting joints