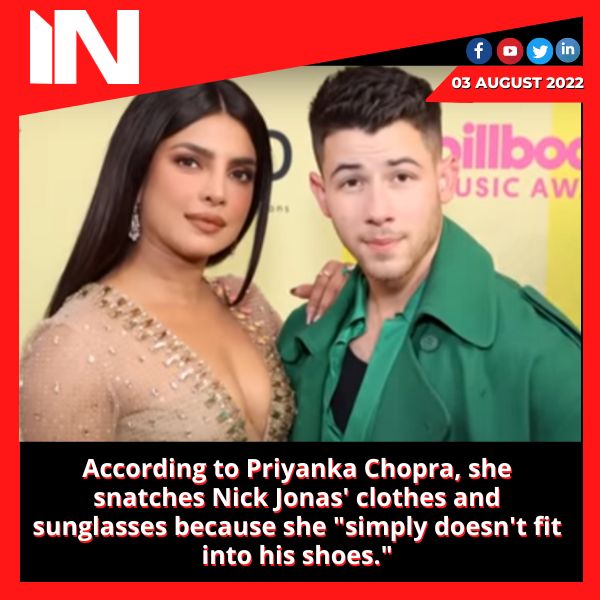 Priyanka Chopra has admitted that even though she has frequently been photographed wearing her husband Nick Jonas’ clothing, she actually “steals” a lot more from him. The actor clarified, however, that she can’t wear Nick’s shoes or else she would have stolen them as well.

Malti Marie Chopra Jonas, who is six months old, lives in Los Angeles with Priyanka and Nick Jonas. Priyanka was spotted donning Nick’s jackets while the cast and crew of her web series Citadel was filming in various locations.

When asked about wearing clothes together with Nick, Priyanka admitted to stealing almost “everything” from his closet. “I frequently dress in my husband’s clothes. Simply put, I can’t fill his shoes; otherwise, I’d want to take them all. I’ll wear his jackets while he wears cords and sets. I nick his sunglasses,” she confessed.

She asserted that she had worn more of Nick’s clothing than her fans had seen her wearing, saying, “Sometimes, you can’t tell which ones I’ve taken. He simply wears really nice clothing.

Priyanka once posted a collage of herself and Nick wearing the same outfit at various events. “Where it started… Where it ended,” she wrote as she shared it on her Instagram Stories. Nick was photographed wearing a white track suit while travelling, and Priyanka later wore the same outfit while leaving the house with Diana, her pet dog.

In recent times, Priyanka and Nick travelled to Mexico with their young daughter Malti to celebrate Priyanka’s birthday. In a recent interview with The New Indian Express, Priyanka’s mother Madhu Chopra revealed that while she massages her granddaughter, Nick bathes Malti and changes her diaper.

The next production Priyanka will appear in is Citadel from the Russo Brothers. She will also appear in the Hollywood movies It’s All Coming Back To Me and Ending Things. She also signed on to star in the Alia Bhatt and Katrina Kaif-starring Bollywood film Jee Le Zaraa. The movie has not yet begun production.

Advertisement
Related Topics:clothesnickjonasPriyankachoprashoessimplysnatchessunglasses
Up Next