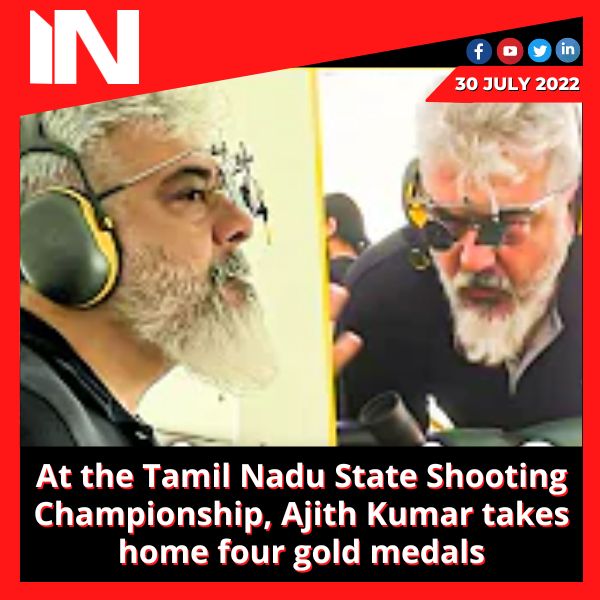 The 47th Tamil Nadu State Shooting Championship was recently held in Trichy, and Ajith Kumar took part in it. The well-known actor won two bronze medals and four gold medals at the competition, receiving praise from followers on social media. A day earlier, many people shared images of Ajith from the event on social media, praising the actor for trying out new things. The 51-year-old is well known for pursuing interests outside of the film industry and has previously raced in Formula Two.

Fans praised the actor for both his skill and dedication to the game. Ajith is an actor who never shirks from following his passion, according to film trade analyst Manobala Vijayabalan, who shared his thoughts on the results and a photo from the occasion. The star is successful in both real life and onscreen, according to a fan. But Thala Ajith is a real hero off-screen too,” one fan wrote on Twitter. “Be it shooting or racing, he is always number one.” Other fans praised the fact that Ajith is still competing at this level in his 50s. It should be noted that the actor won all four of his gold medals in the masters division for seniors. He received two bronze medals.

Ajith is not the first Indian performer to compete in shooting at the highest level. Nana Patekar competed in the National Shooting Championship in 2011 at the age of 61 and had previously won medals in regional competitions. Ajith, however, has a wider range of accomplishments. He competed in the Formula BMW Asia Championship in 2003, placing 12th overall for the season. He got back into racing in 2010, competing in the F1 World Championship’s feeder series, the FIA Formula Two Championship. Ajith last appeared on screen in the box office hit Tamil movie Valimai, which has a budget of over 200 crore.

Rashmika Mandanna flushes when Vijay Deverakonda describes her as attractive and pretty. When I say your name, “As soon as I…”